The New Year greets us with plenty of white on the ground, but the snow is beginning to feel a bit on the stale side, as since the last snowfall of any significance, it has been warmed over by the sun, and hammered into short sheets of starchy wind-slab by the howling winds. The variability of the snow is evident with changing aspect to the sun and exposure to moving air. Waves of supportive snow give in to small regions of breakable crust. Settled powder can still be found in the deep pocketed areas, north-facing slopes and aspects that are more protected from sun and wind. 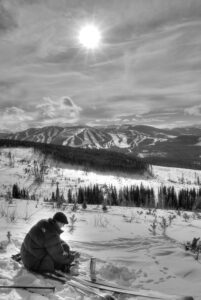 Trails are getting well-packed from plenty of use from snowshoers. Fat-bikes also are making their presence known on trails where the surface has seen enough traffic to make it firm enough to support their relatively small points of contact. We should be getting a reprieve from the heavy snowmobile use of the holiday week, which has made the busier thoroughfares as welcoming as a multi-lane highway. Places such as the Rollins Pass road see winter vehicular traffic speeds that are far greater than what is possible in the summer. Be aware that snowmobiles are traveling at high rates of speed and should you choose to ski or snowshoe on a popular snow-machine trail, that you should stay well to the side and be prepared for evasive maneuvers.

One more day of high pressure, and then the forecasters are expecting us to be in another storm pattern, with the possibility of small accumulations over several days. 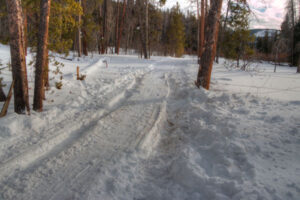 A disturbing pattern of people driving on bike paths and groomed trails has recently developed. Facebook posts show cars driving at high speeds on the paved bike path parallel to Highway 40 between Winter Park and Fraser. Someone also elected to attempt to drive on the Fraser River trail East of the town of Winter Park, perhaps after a night of excessive New Year’s celebration. The deep ruts left behind are more than just an inconsiderate inconvenience. Hopefully, this phenomenon will go away as quickly as it came, whether it is from taking mistaken turns or from joyriding. ​